Hello Everyone,
I am excited to join this forum and community.  I wanted to share a recent success story that also leads into a larger and ongoing question I have around how we create virtual variations of the tried and true theater games used to help our communities warm up, get to know each-other and relax.

While leading a dream team cohort of teaching artists in a series of online prep meetings for our six-week (online & live) filmmaking intensive starting next Monday, (45 Oakland youth joining us oh my!)  I've been trying out theater games that I've used for years with small variations and then asking the cohort if it works or doesn't in the online virtual space.  Here are a few I'd love to share!  And I would also love to hear if there are any others that you've tried out that I could include.

Vogue name game!  Instead of standing in a circle and doing a full body movement with your name that everyone repeats back, have everyone create a vogue pose centered around their face.

*It is important to note that Vogueing is a culture, a people, and a dance, with a current and historical place in society.  (If you haven't watched Pose yet...do so now lol!)

Start by writing out the order in the chat room.  I adapted the language to incorporate the walk into the center of the room name game script.  So it goes like this.

Everyone then copies the vogue pose - "Hi Sagesse!"  and on you go.

Repeating back everyone's name from the top is another variation to add in.

Another game we tried is Pass the Mask.  We played this two times.  The first time, everyone's sound was muted and the experience was not good.  I asked everyone to unmute themselves and we had a much better time.  So if you play this one, make sure everyone's sound is on!

Write the order in the chat.  Cover your face with both your hands, reveal it with some exaggerated face, cover it again, then "peel" it off and pass it on.  The next person cover's their face, revealing the same one you passed on, and then creates a new one and so on.  Adding in a sound with the reveal is a way to add on and raise the stakes. With the sound on we could hear each other's laughter, ho's and hum's and it was much fun.

I attended the Creative Imagination Catalyst Series Workshop and those games are awesome online.  I've also played with Mirror, and the classic Pass the Story games which work well.

I would love to know if there are other games you've all tried out that are working in this space!? Hi Sagesse, I love your ideas. The pass the mask game sounds like a real winner. I think theater games work wonders on line. I agree with you, someone needs to make a list of the order people will go since you're not standing in a circle. I bet magic clay would work very well. We've also played "Yes, let's." If you want to do mirroring all in the main zoom room, you can assign people in pairs and have them pin each other's video picture. That way you can give instructions to everyone at once and play soft music if you want. Anyone have any other ideas?

Yes!  Magic Clay!  That is a wonderful idea.  Yesterday after a fairly deep check in with our staff that left us feeling heavy with the weight of everything going on in the world and our communities, we did a dance circle!  It was awesome.  So fun.  I just randomly spotlighted everyone and we followed their moves.  Definitely works as well!

@peggytaylor We are into Week Four of a six week program with 35 Oakland youth and we've been playing games everyday in family groups!   I've got a pretty awesome list of what works well.  Yesterday we played Newscast...remember that one?  Also Boal's Image theater series is translating into the virtual world well.  Along with the sound ball series into Orchestra.  Yes, theater games work really well on Zoom!

Vogue name game!  Instead of standing in a circle and doing a full body movement with your name that everyone repeats back, have everyone create a vogue pose centered around their face.

I love this idea Sagesse. Thanks for sharing.

During one of the Creative Catalyst Series, I was in a breakout room with 4 other participants. We had about a minute left so one of the participants grabbed a pen and invited us to have a round of "This is not...". It was a lot of fun. It worked very well. Next time I'll pretend that someone has passed me a pen from my right off camera, then once I'm done, I'll pass it off camera to my left. ☀️

@christopher-malapitan Yes!  We've had fun as well figuring out how to pass the pen so it looks like we are grabbing it off screen.  Love it when that works out!

@christopher-malapitan @peggytaylor Hi! We just figured out another great transition for games like Pass the Ball and Magic Clay.   You pass your hands all the way to the camera and cover it up then the next person covers their camera and takes the imaginary object back!  it's great.

@christopher-malapitan Also...I wonder what happened to your other post about book suggestions.  I gave this lengthy answer yesterday and now i don't see the post?  Weird?  Loved the prompt! 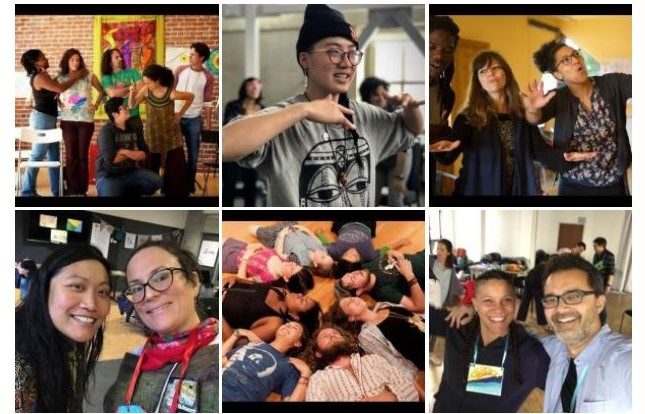