Eric’s Story: The Power of Drama 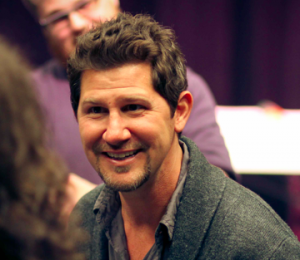 Eric Mulholland is an actor and facilitator with more than 20 years of experience in using theater for youth empowerment. Eric is trained in the Creative Community Model and regularly facilitates for workshops and camps based on this way of working. Here, he tells us why theater is such a powerful medium for working with youth, and hails Facebook as a new dramatic medium.

“Story is a powerful medium for anyone of any age. It’s part of the human experience,” says Eric.  “Teenagers often feel misunderstood and awkward, theater provides a great medium for them to tell their story and to start to become authors of their own life experience.”

“Theater is a form of creative expression that helps people to digest and understand the world around them, so drama and youth work feel like a really natural fit.”

Eric found his passion for drama as a form of expression when he young. “I have a really strong memory of feeling very out of place and unlike everyone else when I was teenager. Through theater, I found a community of people who accepted me for who I was and who helped me to express myself.”

Having experienced the power of drama, Eric left high school to train as an actor, but while he was doing that, he also looked around for opportunities to use his skills in working with young people. “I spent some time teaching dramatics at a pre-school and I also led some arts-based workshops as part of a local government after-school program.”

“I’ve been working with young people and drama ever since. The best thing about my job is watching a young person flower in their creativity and seeing the transformation from where they are and how they feel at the beginning to where they are at the end. If a young person arrives looking a bit anxious or uncomfortable, I love to see them transform and to become more centered in who they are by the time they leave. It’s a truly incredible process to watch. I never get tiered of watching that happen. I also love seeing people’s joy when they discover theater for the first time.”

Sadly, Eric feels that too many young people are put off the idea of pursuing the dramatic arts by misconceptions about the type of people who usually become actors.  “Many of the young people I work with tell me that they thought all actors were extroverts. I always try to make people see that theater is for everyone. I’m an introvert by nature and I try to use theater as a tool to see how I can be more expressive, but I’ll always be an introvert and I don’t want to change that.”

“I recently led the first class in a course I am leading at the Everett theater in Washington. To get to know everyone, I asked the young people what they felt they needed to grow to the next level as an actor. One young lady started to speak and almost as soon as she did she started to cry because she was so anxious and concerned that she didn’t have what it took. She told us that she felt that she wasn’t creative enough and that she was in the wrong place. That’s not uncommon, I meet young people all the time who have developed the idea that they are simply not creative people and that they have no business being involved with the creative arts.”

“I completely disagree with that concept. Everyone can be an actor. Theater is a skill and anyone can learn it. There is a science behind acting. The more you study and practice, the better you become.”

“The way community works is changing rapidly at the moment. Social media is all about creating community, and it’s very dramatic too. Facebook is really an exercise in character creation. You create your character every time you log in. You reveal parts of yourself and you tell stories to build up a character sketch.  For me, that just proves that as humans, we all have a built in need to tell our own story. We will always find new ways to do that.”

If you are using theater as a medium for youth empowerment, join the discussion on our LinkedIn page to swap methods, tips and anecdotes with other social artists working in your field. 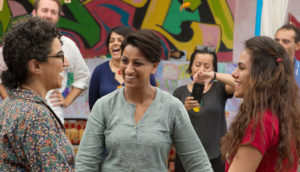